Is Wave Therapy Right As ED Treatment For You?

Erectile dysfunction is also known as ED. It’s when a male is unable to keep or even get an erection that’s firm or hard enough to have sexual intercourse.

The condition is unfortunately very common, with more than 3 million cases each year in the United States alone. It is, however, treatable by medical professionals. It’s also typically self-diagnosable, with imaging or lab tests rarely necessary. Without treatment, this chronic condition might last years or even a lifetime.

ED is potentially a sign of an underlying psychological or physical condition. It can strain a relationship and cause both individuals in that relationship stress while draining the self-confidence of the person suffering it personally. Patients looking for help with this need to have those potential underlying conditions checked out, and if treating them isn’t helpful, there are assistive devices, medications, and therapies available.

One of the newer procedures starting to get offered at more medical establishments is called wave therapy or shockwave therapy. If you’ve heard of it but aren’t sure what it is or if it’s right for you, then keep reading.

Shockwave therapy is a procedure that uses acoustic wave energy to initiate neovascularization in particular body parts. Neovascularization is a process of new blood vessels forming, which helps the affected part of the body enjoy improved blood flow. 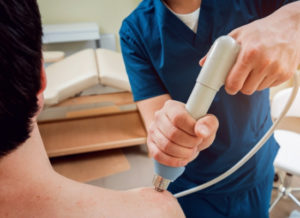 This kind of therapy has already been useful in helping patients suffering from kidney stones, many heart patients, and those with joint inflammation or even fractures. Not long ago, medical researchers and scientists started looking into low-intensity wave therapy as a potential avenue for ED treatment.

Proper and sufficient blood flow proves crucial to male erections. When a male gets sexually stimulated, his arteries will widen so that his penis fills up with blood. It’s the blood that gives a penis the necessary firmness for vaginal penetration. Men with blood flow issues to their penises typically have weaker erections or none at all.

Several kinds of ED treatment exist, including penile injections, vacuum erection devices, and the many pills advertised so much on television. However, such therapies get conducted only as needed, and many only work for single sexual encounters. Shockwave therapy or wave therapy is different, since it targets the whole erectile mechanism, meaning men have better chances of having natural erections unassisted.

In order to administer wave therapy, the clinician will coat a probe with a special gel before applying it to the patient’s penis. Different areas of a penis get targeted in treatment sessions of 15 or 20 minutes. The need for anesthesia is rare since pain isn’t typically experienced. However, treated areas might have a tingling sensation.

The clinical trials that have focused on wave therapy as an ED treatment have shown encouraging results. Patients who have received this treatment have also tolerated the process well. Many men who have participated have discovered that their erections have improved and that they’re able to enjoy sexual intercourse. Men suffering more serious erectile dysfunction might still have to take medications on top of their wave therapy.

It should be noted that wave therapy is still thought of by many as an experimental treatment. Scientists and researchers have to do more research in order to solidify the current findings. Also, at the time of writing, wave therapy as ED treatment was something of a general approach. It will take time to work out how to use wave therapy for various kinds of erectile dysfunction so that specific treatment protocols can be developed. These kinds of protocols will better guide practitioners on how many treatments might prove necessary and which areas or parts of the penis are best to target and focus on.  However, Wave Therapy has been deemed safe for the treatment of erectile dysfunction and we have helped many patients get their sex life back.  If you want to find out more about wave therapy for ED, feel free to contact us for a one on one confidential consultation.

Even though there are calls for more research, wave therapy has been studied more than once, and it holds a lot of appeal as being less invasive or having fewer side effects than other ED treatments. Wave therapy is also sometimes called penile extracorporeal low-intensity shockwave therapy. The way it works is using acoustic pulse waves of low intensity to concentrate on the micro plaque inside the penis before breaking it up, which leads to better blood flow. Another effect of the waves is the induction of nitric oxide release, yet another process that promotes blood circulation. It also helps with the aforementioned process of neovascularization that helps new blood vessels form.

Multiple studies have indicated that wave therapy used for ED might actually prove more effective than other techniques, including penis pumps and oral medications such as Cialis and Viagra. A review published in 2017 covered data from 637 patients in nine different studies. The conclusions and findings showed that wave therapy resulted in improvements in both Erection Hardness Scores and International Index of Erectile Function measurements. Additionally, treatments could potentially last up to three months.

An earlier study noted that wave therapy was effective in men that had previously responded to various phosphodiesterase five inhibitors, like Viagra. However, wave therapy could also help men who weren’t responsive to such drugs become actual responders. A subsequent trail looked into using wave therapy more closely in the men who weren’t initially responding to PDE5is. The group of men kept using the pills while also getting thousands of shockwaves each week for three months. After a month, two-thirds of them were capable of erections sufficient for sexual intercourse, and nearly all of them could still do that after three months.

If you’ve had issues recently with erectile dysfunction, you know how demoralizing and even devastating it can be.  As an erectile dysfunction clinic in Wayne, PA we understand this and always treat every conversation with the utmost confidentiality and respect.  Losing luster in the bedroom can dampen a relationship and ruin your self-esteem and confidence. Talk to your doctor about options, including wave therapy. Consider it especially if you have tried the various prescription pills and found no luck or know they need some extra kick. Wave therapy can also prove useful if you just don’t care for the side effects of any prescriptions or just don’t like how you have to take one every time you want to enjoy your time with your partner.